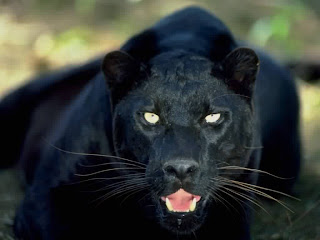 At dusk, the Queen Of The Vampires goes Christmas shopping.
It is crowded, like being a ping pong ball in one of those lottery picker machines.
The Queen Of The Vampires starts feeling a little peevish. She shape shifts into a panther and jumps onto a display of cashmere sweaters, which she delightedly begins shredding with her fearsome claws as if she were a house cat on a sofa.

She hops down and wanders over to the jewelry displays. Some fat girl wearing a track suit jostles the QOTV and just like that, she's had enough.
She leaps onto the glass counter, makes a half turn and, showing her dreadful canines, she makes the counter shiver with a loud feline scream that shrinks hearts all the way out to the parking lot.

This is her way of saying, "Excuse me, ladies."

Finding herself suddenly alone, she helps herself to a large diamond necklace, and, finding no salesperson, she happily trots out the door with it in her mouth. Then she shape shifts back to her
Dark
Mysterious
Eternal
Self, and leans against the wall of the store, having a cigarette.

A handsome policeman carrying a shotgun asks her if she has seen a loose panther. She fixes Officer Do-right with her odd yellow eyes, and then leans in as if to whisper an answer into his ear.
The officer then stumbles away in a daze, looking pale and weak, two spots of red on his throat.

Children find his shotgun lying on the sidewalk outside the store. They spin around with it, shouting happily under the approving gaze of the Queen Of The Vampires. However, their mothers are not as enthused, and pull them away by their ears...
That is,
Except for one dark-haired mom who says to her little girl, "No, honey, like this," and together they blast a hole right through the middle of the eagle on a nearby mailbox.
Holiday cards spill out and onto the pavement.

Whistling "Rockin' Around The Christmas Tree", the Queen Of The Vampires starts walking away.
A severe looking woman passing out religious pamphlets says to her scoldingly, "Girls who whistle come to bad ends!"

The Queen Of The Vampires flashes her best smile.

Out in the parking lot, The Queen of The Vampires sees a six year old girl with a police shotgun over her shoulder, walking next to a dark haired chick wearing killer boots.

The QOTV decides to go to Danny's Coffee Shop.
"Come on, Officer Friendly," she says, putting her arm around the still disoriented policeman. "You can protect and serve me while I get a mocha latte."

And off they go, like a couple of stray reindeer.
__________
Labels: Danny's story poems the QOTV zen cones

mac said…
Taking a day off brings this forth?

Unknown said…
I LOVED this.
Can I be the dark haired mom who shoots the mailbox!!! lol
Okay, and your last post made me laugh out loud, Jesus for petes sakes zapping a small child. OMG.
He may say Oops, but LOL? Not a chance!!! lol
Too funny, you.
xoxo
December 16, 2009 at 9:56 PM

Ileana said…
Love it when she walks away whistling a Christmas carol hoping to come to a bad end...that sassy vampirella! ;)
December 16, 2009 at 9:58 PM

Riot Kitty said…
This is the best sentence ever:

A handsome policeman carrying a shotgun asks her if she has seen a loose panther.
December 16, 2009 at 11:04 PM

The romantic query letter and the happy-ever-after said…
A sort of riot of emotions. I dig it, a lot. Your queen is for me something of a voluptuary and I like her for it.
You take care.
December 18, 2009 at 4:36 AM

Susan English Mason said…
I love the way you pay attention to every detail. I think we should all go shoot up mailboxes around the globe and give the poor mail carriers a little Christmas present pick-me-up, don't you think they could all use a little Calgon take me away by now?
December 19, 2009 at 10:00 AM

Kay said…
where does it come from!? your imagination run wild is wonderful! amazing really, thank you for taking me (us) there
December 22, 2009 at 2:30 AM