Book Review : "The Sun Down Motel"

The Sun Down Motel by Simone St. James
My rating: 3 of 5 stars

It was okay. It's about Carly, who goes to Fell, New York to try to unravel how her aunt Viv disappeared while working the night shift at the Sun Down Motel 35 years previous. The POV shifts between Viv in 1982 (which I much preferred) and Carly in 2017. Carly annoyed me. I kept picturing her as Denise from Stan Against Evil. Appropriate I guess, since the motel is quite definitely haunted. 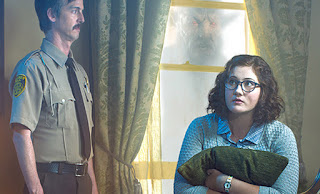 That said, this is less a ghost story than it is Nancy Drew Visits The Bates Motel. The first half tried my patience and I couldn't decide if I liked it or not. The spooky motel was cool, but the two dopey girls running around playing teen detective wore thin quickly. I also got very sick of the author's habit of invariably and everlastingly describing everyone's full ensemble every time they appear. Yes, we want to be able to visualize the characters; no, we don't need the full Marie Claire.

In the second half I have to say that I did get drawn in a lot more, as Viv consistently held my interest with her determination and resourcefulness. Carly, OTOH, continued to grate, with her super convenient luck in finding just the right (you have no idea) apartment, and her crush on the straight-from-central-casting handsome rogue Nick, who stays at the Sun Down because it is the only place he is able to fall asleep. (Um, kay.) The creepy motel is certainly the star here, and there were other things to like, including the weird baddie who checks in from time to time, but I just could never shake the tv movie feel of the whole thing. Not really recommended, though it is readable. Kudos for the cover, which is excellent.