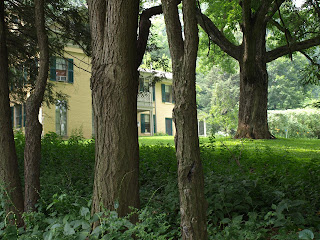 There are more ways than one--
that books can burn.
We sat in high school English class,
blank as babies--
as disinterested as the wrong lover--
being spoon fed the prescribed pablum
our curriculum required.

Our teacher was a young guy with a mustache--
nothing sinister about him.
He told us,
"This poem of longing expresses Emily Dickinson's desire
for a Philadelphia minister
whom she heard preach only once."
or Judge Otis Lord.
or Kermit the fucking frog.

Still,
I felt the fire.
I felt the funnel begin to turn--
the Rotation and the Dip--
and everything I had known or thought before was just blown to sticks and dust.

I got the infection,
felt the calling--
to put words to the weather of my heart.

In 2007, I visited the Dickinson Homestead in Amherst.
I saw the room--
the unassuming small space
where Emily wrote her soul out on paper,
then carefully stored it in a trunk under the bed.

Out the window,
the trees and garden, those double spirits,
vessels for both their own beauty and the beauty she gave them--
with each word, leaving the flesh and divinity of herself
caught on every thorn and stone.

Across the way, The Evergreens--
home to her brother and his wife Susan.

Susan knows
she is a Siren--
and that at a
word from her,
Emily would
forfeit Righteousness--

To a woman who felt everything,
this must have been the most exquisite torment--
a gorgeous bird contained in the cage of her time and mores,
and able to be holy enough,
and profane enough,
and human enough,
to make such torture so beautiful that it saturates Sight.

To own a
Susan of
my own
Is of itself
a Bliss--
Whatever
Realm I
forfeit, Lord,
Continue me
in this!

The most particular and intimate feathers
held in those wings beneath her bed,
were fed to the fire
upon her death.

In that room, and in the garden later on,
She was there,
and she blessed me.
In the simple passion of every word,
she told me, sister, sing it.
Over so many seasons, one bird can't last,
but another of its kind can lift her head
and there are the notes, still sung, from a Twin Heart.

My friend had given me a choice, the last day of my visit--
to meet her new musician girlfriend,
or go to Amherst to see the Homestead.
All the way from Plymouth, she played the girlfriend's only cd--
great the first time, then good, then...
well, she's in love, and she's making this trip for me.

She couldn't stand it, though, by the end of the tour.
"Why isn't there anything about Emily Dickinson's lesbianism?"
Our guide answered smooth as Teflon,
the non-answer she had been trained to give,
and quickly switched to a short course on the furniture.

Love.
Longing.
I felt it, in waves, coming off my friend as she drove.
I felt it from Emily,
with the Evergreens as near as truth ever gets,
and as far, in its way, as places foreign on my Homesick eye.

And were You lost, I would be –
Though My Name
Rang loudest
On the Heavenly fame –
And were You – saved –
And I – condemned to be
Where You were not –
That self – were Hell to Me – 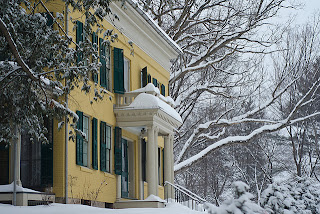 "I Cannot Live With You" and the three quoted pieces written by Emily Dickinson. I hope that I have done her justice with the rest.

For Corey's "Destinations and Dialogue" challenge at Real Toads.

Margaret said…
I have sat here, just mesmerized by this. I had NO idea... Perhaps someday this will be talked about at Amherst... like the "slave tours" are now probably THE most popular tours at plantations. You really reached out here with this emotional piece. Yes, justice has been beautifully served here today.
April 11, 2013 at 11:32 AM

hedgewitch said…
Every word of this from the heart, to the heart, and though you know I seldom quote, this just gleamed like gold for me:

"I got the infection,
felt the calling--
to put words to the weather of my heart..."

Shay, if anyone could pick up Emily's sorrow-laced shawl and blood-ink pen, it would be you, and the longing that is in your every poem is so clearly shining in her own words here. Just a superb piece.
April 11, 2013 at 12:14 PM

Herotomost said…
Good lord....I can't even begin to describe the feelings I was feeling while I read this. I start reading things from a distance to try and gather perspective and "big picture quality" but this didn't allow for that. It sucked me in. I felt like I was listeneing to the monologue of a woman whose life had been reshaped by that one thing that blankets the heart and forevermore keeps it warm. Stifling on a hot day, when things seem at their worst, but comforting and soft on most days. You not only did her p[efect justice, but you upped the ante and made the feeling your own. I know, gushing here, I don't do it often to this degree, but many things don't live up to the quality of emotion that I have witnessed here. To say it more succinctly..."Damn Girl...are you fucking kidding me?"
April 11, 2013 at 1:04 PM

Ellecee said…
Oh my goodness, this is so beautiful, it brought tears to my eyes. What a wonderful tribute to this poet from days long gone but most certainly not forgotten. The words of your special dialogue attest to that.
April 11, 2013 at 2:41 PM

Kerry O'Connor said…
These were the lines for me:

one bird can't last,
but another of its kind can lift her head
and there are the notes, still sung...

I know how much this journey to Amherst means to you, and this piece brings it all together so very well.
April 11, 2013 at 4:29 PM

Pat Wahler said…
Wow. Beautiful and powerful. Makes me want to pick up a biography about the poet.

Pat Wahler said…
P.S. Oops! I meant to thank you for the suggestion of disabling anonymous comments. I may have to give it at try!

Sioux Roslawski said…
Reading this piece was like traveling to Amherst, and that's fortunate, because I've never had the pleasure.

HermanTurnip said…
I read this with a certain fascination. I could feel the personable words poured into this piece, and the changing of text really adding life to the words. 'Twas my favorite work of yours this week!
April 11, 2013 at 9:57 PM

Lydia said…
Done her justice with the rest? Lord, woman, this is sheer beauty.....the stuff new books are made of, and I hope you will do just that. ♥

Alice said…
This is one of my favorites of yours. I particularly enjoyed the formatting, the weaving of your words and hers. It recreates the melding of your two spirits as you walked through her home, stirring her ghost.

You may want to check the size of your pink text. It increases partway through. Perhaps it was intentional, but I don't think so.

If you ever really loved someone, the very last thing you should want to do is live with them, sharing Life. There's too much work and irritability, far too little romance, to keep a magical love alive under the same roof. Better she should love her from afar.

I love this opening:
"There are more ways than one--
that books can burn."

I found this very real and true story-poem to be quite moving. Particularly these parts:

How perfect to capitalize those words. They are so strong and powerful in the way they alter your universe that they are proper nouns.

"I saw the room--
the unassuming small space"

"with each word, leaving the flesh and divinity of herself
caught on every thorn and stone" (perhaps my very favorite part of the piece)

"To a woman who felt everything,
this must have been the most exquisite torment"

Don't you think more poems should be written from the Sirens' perspectives? Or do you think they cannot write? Do they only inspire poetry? Or are any them poets themselves? Nevertheless, you should write one from Susan to Emily. Or completely fictitious characters. Or both.

This is so good:
"The Ones who
cite her most
Have never scaled
her Haunted House
Nor compromised
her Ghost ...
those who
know her know
her less
The nearer her
they get"

Their closeness sends her running inward.

"And that White Sustenance –
Despair"

The hyphens are so effective at creating proper pauses. It's really growing on me, the more I read.

Susie Clevenger said…
We walk among dead poets forgetting they were flesh and blood full of passion and pain. Thank you for the tour and words to bring Emily to life.
April 17, 2013 at 11:38 PM

Anonymous said…
you're probably the only poet who could do her justice... the final verse of hers you quoted is perfection.