At St. Catherine's
Master had a bowling ball in his throat.
A heavy fog drifted around our desks,
in our hair,
everywhere.

Ship's horns blew.
Some drowned.
I still can't identify the hypotenuse of a right triangle
or the bodies of the girls who turned to pussy-willows
during the long afternoons.

At night at St. Catherine's
I was in love with a girl who was not in love with me.
She spent her evenings stitching the windows closed,
while I fell in and out of clouds
like a blackbird in a storm in a book in my head.

St. Catherine's became a sea port,
then an art gallery,
then a candle wax manufactory.
It groaned under heavy currents,
the bricks ran in the rain,
then it caught fire and drifted into the harbor.

After St. Catherine's,
the girl who was not in love with me died
when her skirts became sails and sank
somewhere off South America.
The guanacos  came down to eat her jewelry from her ears and fingers.
Then it rained but never touched the ground.

St Catherine's girls' choir
saved itself under my skin.
In the silent hours when my new love turns like stirred batter in my arms,
I can hear Handel.
Then I am alone except for the guanacos with their sorrowful eyes
who graze on the lichen in my palm, around my heart, and in this poem.
__________________________ 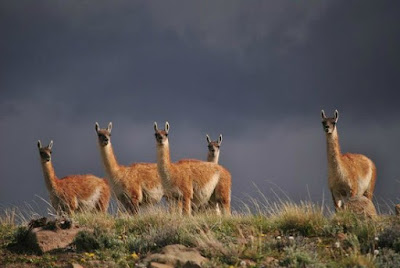 Process note, courtesy of Wikipedia:
Some guanacos live in the Atacama Desert, where in some areas it has not rained for over 50 years. A mountainous coastline running parallel to the desert enables them to survive in what are called "fog oases" or lomas. Where the cool water touches the hotter land, the air above the desert is cooled, creating a fog and thus, water vapor. Winds carry the fog across the desert, where cacti catch the water droplets and lichens that cling to the cacti soak it in like a sponge. Guanacos then eat the cacti flowers and the lichens.

And:
St. Catherine's Taffy is a candy made by girls in Quebec to honour St. Catherine, the patron saint of unmarried women on her feast day, November 25.[1] St. Catherine's day is sometimes known in Quebec as "taffy day," a day when marriage-age girls would make taffy for eligible boys. Marguerite Bourgeoys, a founder of the Notre-Dame de Montréal and an early teacher at Ville-Marie, the colonial settlement that would later become Montreal is credited with starting the tradition as a way of keeping the attention of her young students.
Labels: catlick girl on the loose dare to post unprompted for those in peril on the sea girls who wear glasses create their own reality guanacos Maritimes eh? saltwater taffy Santeria for schoolgirls

Mama Zen said…
I'm damn near speechless. This spins beauty like taffy out of the unexpected. I loved the process notes, as well.
April 15, 2018 at 9:43 AM

Sioux Roslawski said…
Shay--I started to cut and paste the line about turning into pussy willows into my comment, but then I swooned over the whole poem. Do you want me to paste your whole piece into my comment, proof of how swoon-worthy it was? I would have done it, but it just seemed needless.\

hedgewitch said…
"..I fell in and out of clouds/like a blackbird in a storm in a book in my head..." Just one of the utterly alive images in this--which manages to be not just full of such surreal visions of the heart/mind, but also a strong emotional narrative. Your symbols are so poignant, so achingly apt that I could not read this dry-eyed. Beautiful, consummate judgement and skill and feeling and thought at work here.

Sherry Blue Sky said…
The girls turning into pussywillows and the line Joy quotes just Knocked. Me. Out. Fabulous writing.
April 15, 2018 at 11:18 AM

Ellecee said…
This is a beautiful poem, I should write those words in caps, for praise not anger. I enjoyed your notes as well, they brought the poetry even more to light. :-)
April 17, 2018 at 8:20 AM

The process notes about the lack of water are heartbreaking.

The poem, just like all the others, is brilliant. But I favor these lines:

"A heavy fog drifted around our desks,
in our hair,
everywhere."

"She spent her evenings stitching the windows closed" ... It's never going to go well if you love a girl like that. She's clearly afraid of everything.

"while I fell in and out of clouds
like a blackbird in a storm in a book in my head" ... AMAZING!!!

"The guanacos came down to eat her jewelry from her ears and fingers." ... I really like that extra space after "guanacos" giving that very necessary pause without having to resort to a full line break.

"St Catherine's girls' choir
saved itself under my skin."

annell4 said…
I learned much from your poem, and loved every word. Your process notes were helpful. So some reason I thought guanacos were lizards, I'm glad they weren't. So much to love!!!
April 17, 2018 at 10:54 AM

a said…
Your writing is truly transcendent. I’m always transported elsewhere when I read you
April 17, 2018 at 11:50 AM

Kerry O'Connor said…
I agree with Ash.. there is so much to love in this poem, but especially for me the third stanza which could stand alone in all its perfection.
April 17, 2018 at 12:04 PM

Margaret said…
Illustrations naturally form in my head when I read this - I too swooned over the third stanza.
April 17, 2018 at 2:07 PM

tonispencer said…
I became acquainted with the guacano and the Atacame desert years ago in a trip to Chile. The fog oases are astounding to see and to realize how much moisture bathes the area. I loved the line about the girls turning into pussy willows and actually, all of it. The taffy....All of it. I can remember pulling taffy once as a child and how much I hated the sticky stuff on my hands. I still dislike it to this day. To think of the history behind it at St. Catherine's school. Wonderful write.
April 17, 2018 at 5:21 PM

okay - just how dare you set this line in, 8th one as it is, after this peculiar entrance, an exam, that I'm sitting, and then follow through with girls, bodies, turning to pussy-willows and long afternoons?

huh? answer me woman, how dare you?

... muttering to self about stitching windows closed, falling in and out of clouds, black birds, nests, .... damn, darting nuns running on those silent shoes in my head ... and yeah, uh huh .... please, please please don't stop there .... oh no, she continues on to sea ports, art galleries, museums, wax factories ... can we say Halifax, please and then of course, sure, yeah, bring up La Tire de Ste. Catherine ... as if this isn't enough (and oh, people, people, it's not as "delicious sounding as you'd think", I'd know, I'm from Quebec)
back to where-ever the hell I was .... okay - then fog, collecting water, the whole "love animal" - they seem to have beautiful eyes - and okay - the HELL with it ....
I'm gonna just go off and "confess" to the good priest, weeping all the while, because this is not a love poem, right? and it's not so rich and layered and speaks so full of unsuspecting metaphors and actual concrete pillared images and we're not left stunned into a silence that even the most black-glared eyed headmistress could command in less than 3 seconds ....
so yes, forgive me - but this has the bite and sting, and hardness of Tire Ste. Catherine ... and yet a running softness that sits in the belly ... but that's nothing to do with the candy, just this isn't all puff-and nonsense ....

Rosemary Nissen-Wade said…
Fantastic, in every sense. And also I believe every word, I know it's all true.

While it's all wonderful, the images that stay with me the most are "my new love turns like stirred batter in my arms" and "The guanacos came down to eat her jewelry from her ears and fingers."