The Bright Coin Of Forgiveness

At the north central bus station,
fashioned from the rib of a skyscraper,
sat an overcoated old man gasping in a mild breeze
of exhaust, apple blossoms, and cigarette smoke.

He tugged at the strap of my bag as if I were the signal to get off.
"Take this," he said,
his eyes marbling up.
First, he drew a morning glory vine from his sleeve.
It made me queasy to imagine
where the root of it might be,
twining into the gray, dying husk of him.

"Don't encourage him," my mother's gone voice
jabbered in my ear,
correct, picked clean, horrible.
"No thank you," I said, borrowing a tongue.

Next, the palsied old fool produced a large, bright coin from a huge pocket.
Goddess only knows what lives in there,
minting rot and 78rpm records with knifey names
and purple labels.
"Take it!" he urged, holding it at me.

The bus station vendors will sell you anything--
tired sodas, foreign brides,
pills, candy, ID's, bird bones.
My sticky companion probably got his coin in change
when he bought a last breath
with wishes and turpentine.

"It's the Bright Coin of Forgiveness."
He looked like an open bible.

I wondered if I could take the coin,
file it down,
and split somebody's skull with it.
Someone who'd toyed with my heart,
or raised me
in a pen with the starved cats
out back.

Just like that, the old nutjob died,
leaking oil,
dangling on the far end of instant erasure.

His coin fell.
I picked it up
quick as a juiced bus station sparrow,
and set it carefully over his good eye.

"I forgive you," I whispered,
though he had done nothing to me.
Everyone made a path for me to the 415
and in that moment I felt
celestial,
divine,
and so utterly alone.
_____

for Bjorn's goose at Real Toads. 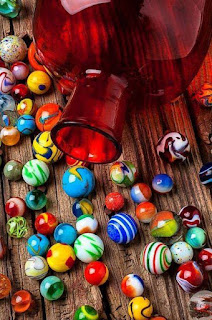 annell4 said…
I love this, thank you for taking me with you, love to ride on buses, love old men, bright coins, your Mother's gone voice, and all the other gifts your poem is made of! the ending is a perfect way to end your poem and the bus ride. xoxo
April 30, 2018 at 4:06 PM

tonispencer said…
Wow. The coin of forgiveness. Years ago I learned to fling sharpened coins in martial arts. I still keep some in my pocket just in case. But this....this is absolutely brilliant. And I do like our celebratory haiku. Haha. I figured you'd write one sooner or later.
April 30, 2018 at 6:27 PM

Rosemary Nissen-Wade said…
Oh, this is such a brilliant poem/story. I love every element of it.

Congratulations on the 30 poems!

But – what have you gone and done??? You have to be very careful now: attempting haiku can rapidly become addictive, lol! (Perhaps we'd better call this one a senryu.)
April 30, 2018 at 7:22 PM

Anonymous said…
It's been quite the wild ride/slide in 30/30 - and how fitting, (I'll forgive you and overlook the Haiku) an ending.

I like the layers here, the images, the weird juxtapositions, and the old man - trading coins for currencies of soul. Startling and fresh, of the flesh, dying young for old.

Wonderful to have this on my dying tongue, for a night drawing long.

brudberg said…
Oh ... this was weird... I think I gave a comment but it just went into smoke.

I love this, the awkward meetings turning into something surrealistic that made me think of Garcia Marques, that turns into an allegory... and the haiku is forgiven.
May 1, 2018 at 4:52 AM

Gillena Cox said…
A haiku at this blog!!! i MUST be "tripping"; happily, pun intended

Kerry O'Connor said…
This is a most fascinating tale, Shay. It put me in mind of the Ancient Mariner waylaying the wedding guest but in a post modern setting. I think the final touch of forgiveness and laying the coin on the dead man's eye is nothing short of plain brilliance.

Also, I am raising a toast to you on completing the 30 day challenge. What an inspiration you have been throughout the month.

Anonymous said…
What a way to end the month Shay. So much myth wrapped up in this and a depth of feeling that lies somewhere between the words. You have been an inspiration throughout April. Well played you.
May 1, 2018 at 7:49 AM

hedgewitch said…
I agree with Kerry--this has a very fable-like feel to it, and also a great deal of what for want of a better word I will call wisdom--emotional wisdom, the wisdom of hindsight allied with the knowledge of frailty--anyway, another high-above-the-bar poem from a month of them soaring into the clouds. Congratulations on making it a month--and obviously, you have grown as a poet, what with the new ability to write haiku....*runs*
May 1, 2018 at 12:16 PM