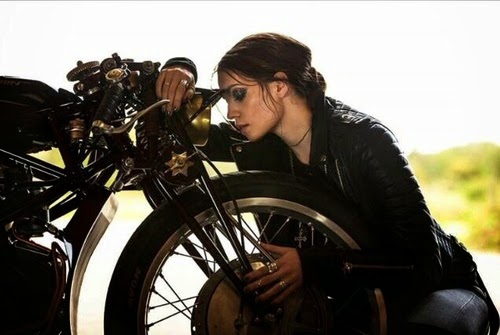 Orpheus, you dropped your lyre
like a tear from the Sun's eye
there at the portal to day.

Hades tricked you,
but the truth is, baby,
I wasn't behind you anyway.

I scavenged your lyre,
and while Cerberus watched,
turned it to my own purpose.

Ha! I love it!!
Your take on the Greek mythological characters is so sassy.

I think G-man would have loved this. I do ~

With a bike like that.. why care about the lure of lyres --- no apologies needed.

Modern day myth... you do it like a tuff girl (I mean that as a compliment just in case it's not clear).

Oh, poor Orpheus! Just as well he never found out.

Love the title. Bringing Greek mythology into the future..great poem!

Research first:
"In Greek mythology, Eurydice was an oak nymph or one of the daughters of Apollo (the god of music, who also drove the sun chariot). She was the wife of Orpheus, who tried to bring her back from the dead with his enchanting music. ... One day, Aristaeus saw her and pursued Eurydice, who stepped on a viper, was bitten, and died instantly. ... Distraught, Orpheus played and sang so mournfully that all the nymphs and deities wept and told him to travel to the Underworld to retrieve her, which he gladly did. After his music softened the hearts of Hades and Persephone, his singing so sweet that even the Erinyes wept, he was allowed to take her back to the world of the living. In another version, Orpheus played his lyre to put Cerberus, the guardian of Hades, to sleep, after which Eurydice was allowed to return with Orpheus to the world of the living. Either way, the condition was attached that he must walk in front of her and not look back until both had reached the upper world. Soon he began to doubt that she was there, and that Hades had deceived him. Just as he reached the portals of Hades and daylight, he turned around to gaze on her face, and because Eurydice had not yet crossed the threshold, she vanished back into the Underworld."

Now I can't wait to read your poem.


And, it's delightfully impressive, of course. I just love what you do with your vast mythological knowledge.

These are my favorites:
"a tear from the Sun's eye"
"at the portal to day"
"while Cerberus watched"
the last stanza

"turned it to my own purpose" ... I do wonder whom she planned to woo or manipulate with her new musical tool.

(Feel free to delete this comment if it's inappropriate; I just thought someone else might benefit from the information.)

Love the twist you've given this great myth!

I love it when you go Greek.

A simpleton comment, but I love "portal to day." Excellent.

Ha! I'd rather have Cerberus than that wilting, candy-ass Orpheus any day. This is not just wry, but has a very rabid brimstone bite.

The image tells me that her real longing is for freedom --- to not be owned by any man, to hit the "open road" (literal or figurative) on her "bike." Maybe all that means is that she wants to sit around and read all day without having to answer to anyone at all.

You get a good balance here between the 'facts' of the original myth, and a sort of alternative history, inventing a context where women could behave as we would have liked them to.