God, In Youth and Age 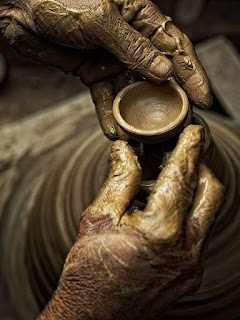 Mistakes were made. Things were done.

There in the void, scattering lava-spitting planets from Hell to next Thursday,

kid must have been stone lonesome.

If He drowned his toys in the bathtub for forty days, hey, it was The Exciting Game Without Any Rules.

Bitter little bastard, and so would you have been.

Awkward with girls, He just popped one pregnant.

Awake at night, His fuck-ups from years ago torture Him still,

all the aggression and acting out.

Stone tablets just made it weird for everybody,

but He had to learn on the fly, no teachers, no friends.

What a smoking pile-up.

So there's His only son, chopping chairs and hope chests out of trees in the shed by himself.

"I'm gonna give you twelve friends, let you see the world, set everybody straight, do and have everything I never had!" Big smile, open arms, well? Well???

Jay turns back to planing the edge of a door.

The flying chips remind Him of His old lava-spitting planets, most of them rocky and dead in the end, and He goes off.

Presto, Jay's in the desert with the devil, for the good of all concerned.

Oh, He talks to the neighbors about sacrifice and salvation,

But every time He sees the hand-crafted coffee table out in the garage,

forgotten next to the Jarts and the lawn mower,

He dips His old white-haired head,

leans down with His spotty hands on His knees

Labels: and now for my next trick children's games flawless is no fun oh well pleasing God sorry seems to be the hardest word Sunday Muse