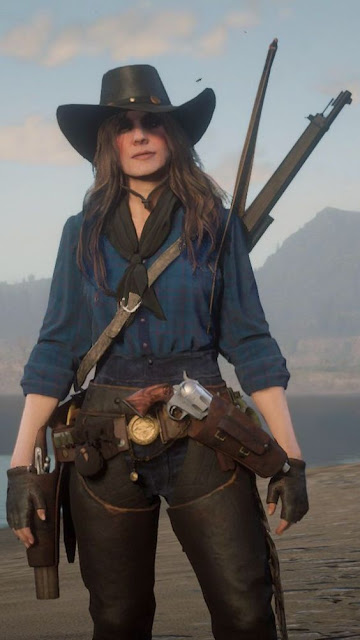 Lil Bruja rides on into Dust Flats, New Mexico on her trusty steed Viejo Loco.
It's been a long slog from the wild gold rush towns where she spent a hard year and a half, on through Gila Valley where she barely escaped old jealous Pecos Charlie and his branding iron in the middle of the night and lit out across the range in pitch darkness.
Now, watching Viejo pick his way around rattlers and tarantulas, with her Stetson low over her eyes and the same bandana around her neck for the last 200 miles, Lil just wants a hot bath and a shot of whiskey.
Finally she hits town, leaves Viejo at the livery stable with a nosebag of hot oats, and pushes through the swinging doors of Texas Jim's Saloon, her spurs jingling with every step and what in blazes does she see but a sign over the bar that says KALE SANDWICHES, ARUGULA QUICHE, MANGO FLAVORED SPRING WATER, WINE COOLERS.
The barkeep has a man-bun and chuckles at Lil when she slaps a silver dollar on the bar, saying, 'Oh my, cash is so over!"
Lil pulls out her Colt Peacemaker, grabs the barkeep by his man-bun with one hand and with the other tucks the cold steel barrel under his chin and growls, "Gimme the veggie burger and a banana smoothie, Hefe," and he does.
__________
for Denise's Six Sentence Story ("range")
Music: Cyndi Lauper & Jewel I Wanna Be A Cowboy's Sweetheart


“I'd rather sing one wild song and burst my heart with it, than live a thousand years watching my digestion and being afraid of the wet.”
― Jack London, The Turtles of Tasman