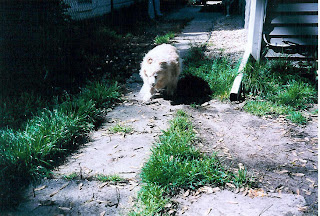 As you know, The Word Garden is meant as a place for poetry. But just today I would like to use it to write about my little dog Alex, to whom I shall be saying goodbye in a few hours.

In January of 1992, my Belgian Shepherd, "Sundance", was well into his declining years, and besides, he had always been my dog, and my partner at the time wanted a dog that could be for her. So, we went to the county animal shelter and met an energetic little sheltie-cocker mix who had been brought in only shortly before. He was curious about everything and looked about him with a bright intelligence and a natural charm. I was particularly happy that he could hear me when I spoke to him, as Sundance had gone entirely deaf and I could only communicate with him using a system of hand signals I had developed for him.

My partner, Liz, smiled and nodded and so it was decided, this was the one we would take home. But the shelter informed us that he needed to be neutered first, and so that would be done and we could pick him up in a couple of days. That day quickly arrived, and unfortunately, I was working, so Liz and her (our) son Joe went to collect him. She had decided to name him Alexander.

They spent the entire day getting to know the new addition, and he delighted in the attention. When i arrived home in late afternoon, in my postal uniform (how embarassing for any self-respecting canine!), Alex came running up to me barking as if to say he was already firmly dedicated to defending his new hearth and home from questionable intruders like me! This became particularly amusing in retrospect, when, despite all intentions for him to be Liz's dog, he attached himself to me as if he were velcroed to my leg.

Wherever I went, Alex would follow and stick close by me. And he knew I wouldnt allow anyone to punish him, lol. One morning, Joe discovered that Alex had pooped in his bedroom, and came hunting Alex to scold him. Alex esconsed himself underneath my desk chair where i was sitting, and I explained to Joe that, clearly, a mischievous raccoon had crawled in his window during the night and perfromed the wicked deed. of course, Joe immediately recognized this hooey for the nonsense that it was, but when it became clear that I wasn't going to allow Alex to be extradited to Joe-land to face charges, Joe abandoned the case with much eye rolling and mutterings. Poor Joe! But Alex seemed to like the result.

The house we lived in then had a fenced back yard and Japanese bamboo growing behind the garage. Alex liked to go in there and play George of the Jungle. The dogs--Daisy, Molly, and Alex by that time--liked to dig a little pit over by the chain link fence, and sit in it. I think it was cooler in summer and warmer in autumn. They would vie with each other for this choice spot, which, over Liz's objections, I allowed them to maintain in the yard. However, Alex rarely was able to claim it, because he was smaller than the girls. Well, one day he stood up, raised one front paw, and stared intently at the Japanese bamboo, as if--shock! horror!--there might be a cat or some other horrid intruder hidden there. (for the record, I like cats lol) Well, the girls, Molly and Daisy, went charging into the Japanese bamboo, and when they did, Alex nonchalantly ambled over and took up residence in the prized spot, it having been vacated by one of the bamboozled girls. Clever little stinker!

When Liz and I split up in 2001, I was the only one willing and able to take the dogs, and so all four of us moved into a new home. By that time, Alex was having trouble with his back legs and his walks had gotten very short and he had to be picked up and placed on the couch, though he could still jump down ok. We saw each other through the terrible sadness of the dissolution of our little family.

Alex, little trouper that he is, maintained his sunny disposition for many years more, though his body continued to fail. In 2003, Daisy died of cancer, and six weeks later a new addition, Bosco, arrived and stole his Mama's heart from the start. For his part, Alex took to snoozing in the bedroom most of the time, rousing himself mostly just to eat, and (sometimes) go out. My carpet got stinkier, but I had shared too much of my life with sweet little Alex to let him go on that account. But now, he can barely get around; I have to carry him to the yard and back in, and he can't really do anything but sleep. And so it is time.

This afternoon, I will place him gently in the car and we will go the vet's office and I will gather him in my arms one last time. This time, for the first time in sixteen years, I will not be able to protect him. No tall tale about raccoons will change what must be. But, I hope, this will be one final gift i can give the little fellow who has given me what pets give....unconditional, delightful, never-failing love. I can release him. I will say goodbye.

And then I will cry.

Nichole said…
I'm crying already, for him, for you. Maybe for us all, Shay.

Thank you so much, from my heart. It's done, he's relieved of his pain now. Meanwhile, I like to think he may look in on the three of us--Molly, Bosco, and me-- from time to time, loving little spirit that he's always been.
October 17, 2008 at 6:57 PM

sundance was there to meet him... i am sure he will come to visit often and warm your feet in the cold winter months, what a lovely bundle of love he is...

Fireblossom said…
Aw thanks, Susanna. We really were a perfect fit. Your words made me feel better. I did try to make his life as happy as I possibly could.
October 19, 2008 at 7:42 AM

Fireblossom said…
Kelly, oh gee, leave it to you to bring up The King of All Dogs, Sundance. Your comment means a great deal to me, thank you.
October 19, 2008 at 7:43 AM

Shark Butt said…
Hi ShayBoscosFoodchik, Me and the big cats sending you and Bosco and Queen Molly hugs. Your friend, Sharkbutt
October 20, 2008 at 8:36 PM

Fireblossom said…
me nebber new me cood love a cat so much. You a goodish frend!!!

Jannie Funster said…
Darn, crying over the Internet again but want to formally pay my respects, even if it is a little late.

I wrote that Chancie after died, melody an all.

I really hate when dogs die.