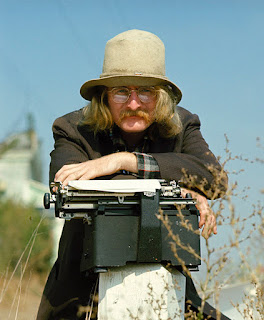 Hello everyone, it's me with your weekly word list poetry prompt. This time our source is Richard Brautigan, best known for his novel Trout Fishing In America (1967).
However, this week's list is taken equally from two of his volumes of poetry; The Pill Vs. The Springhill Mine Disaster (1968) and Rommel Drives Deep Into Egypt (1970). I have selected 10 words from each, with emphasis on words the author uses more than once. 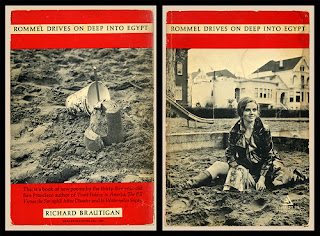 Richard Brautigan was the son of a waitress and he says he only met his father once. His childhood was hard, with periods of abandonment, hunger, and poverty. In 1955, he threw a rock through the window of a police station, hoping to be arrested and fed. All of this belies his whimsical, magical style of writing. His poems, in particular, are often very short, and have a conversational tone, albeit a conversation with a trippy bent.
The Athens Messenger said about Brautigan "There's not a more exciting, more challenging writer working in America today."
Time magazine said, "His poems are, by turns, brutally realistic or surrealistically witty."
Brautigan enjoyed only a very brief window of success and fame, from the late 60's into the early 70's. He is described by a friend as "a very odd guy." He was an alcoholic and suffered from depression, finally ending his own life at age 49 in 1984. 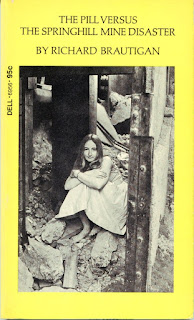 Even so, his poetry is very often light and breezy, although he does delve in to societal and relationship issues in a sort of snapshot way. I don't include the work of any source poet in these posts because our goal here is to use their words as a springboard to our own poetry, not to copy theirs. What we do here is simple: write a new poem using at least 3 of the 20 words on the list provided below, then link up, and visit others. One additional thing: in honor of Brautigan's brief poetic style, if you'd like to write two or three very short poems (all in the same post, and please, no haiku) that's cool. It's up to you! Prompt stays "live' through Friday.
And now, your list:
Baudelaire
candles
ceaselessly
circus
costume
dinosaurs
fish
Frankenstein
grace
groceries
hornets
lanterns
lions
million
poem
postage
pumpkins
spinning
trance
wind
at February 07, 2022
Email ThisBlogThis!Share to TwitterShare to FacebookShare to Pinterest
Labels: Richard Brautigan, WG Word List