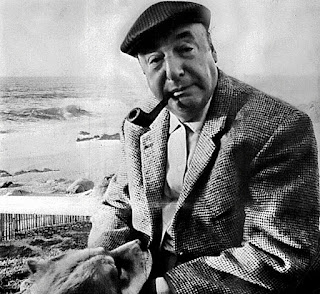 Greetings all. Hedgewitch (Joy Ann Jones) here, standing in for the redoubtable Shay Simmons, who is taking the week off. This week I have the privilege of featuring one of the great Spanish language poets, many say one of the greatest poets in any language, Pablo Neruda.
Neruda, born Ricardo Eliécer Neftalí Reyes Basoalto in Chile in 1904, was a renowned diplomat and prolific poet who produced a huge body of work, from the ardently political to the surreal, from lyric and beautiful love poems to odes to ordinary things like onions and soap, as well as a personal favorite, A Dog Has Died, in my opinion one of  the most memorable poems ever written about grief. He won the Nobel Prize for Literature in 1971, and died in September 1973, shortly after the Pinochet coup d'etat that overthrew Chile's socialist president Salvador Allende. There is some evidence his death may have been politically contrived. He remains "one of the most influential and widely read 20th century poets of the Americas." (Poetry Foundation) 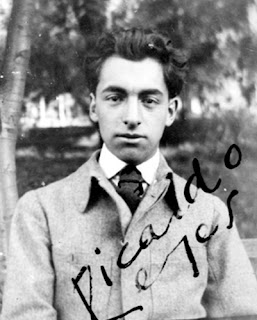 I have sourced the words for this list from my own two collections of Neruda's work, The Essential Neruda;Selected Poems, various translators, edited by Mark Eisnar, and Residence on Earth, translator Donald D. Walsh. Both are bilingual, with poems in Spanish and English. I've tried to choose words which are clear and free of any confusion or nuance derived from translated concepts.

As Shay says,: "What we do here is simple: use at least 3 of the 20 words provided in an original poem. Then just link up and visit others. This prompt stays "live" through Friday.
So, without further ado, here is your list:
arrow
awning
beating
cortege
dog
earth
falling
geraniums
honey
iron
kiss
listen
malediction
naked
origin
petals
poppies
sour
water
white
at February 21, 2022
Email ThisBlogThis!Share to TwitterShare to FacebookShare to Pinterest
Labels: Hedgewitch O' The Wilds, WG Word List