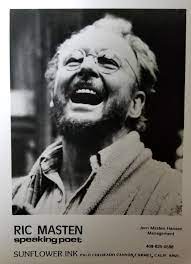 Hello friends, and welcome to another Word Garden Word List poetry prompt. Last week I featured an old favorite, Dave Kelly, but was dismayed at how difficult it was for people to find his work on line if they wished to. I've been mulling that. This week, our featured poet is "The Poet Laureate of Carmel" Ric Masten. When I returned stateside from overseas in 1977, I passed through Carmel and picked up a copy of "Who Wavin'? (a thin body of work)" which is indeed a thin body of work because the book is much taller than it is wide! However, the words inside are anything but thin. 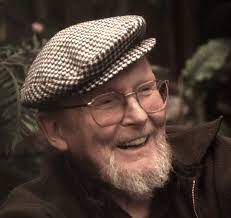 The late Ric Masten, who passed in 2008, was not only a unique and prolific--23 books--poet, but was also a singer/songwriter, an artist, and a few other things as well. About his art, he had this to say: "I learned from Leger that I wasn't a cubist, He spoke to me in French and I answered in English. I didn't understand what he said, and I doubt he understood what I said. We got along fine." This is a typical remark. Of his habit of writing in all lower case without punctuation, Masten said it was "because I never knew how."
I said earlier that I'd been mulling last week's prompt. Up until now, I have avoided including our featured poets' actual poems because the aim here is to use the words on the list to write something of our own, not to imitate the featured poet. However, like Dave Kelly, Ric Masten may be difficult to find, so I am including a link to three excellent poems of his HERE and am also going to include one in this post. Here it is:
the comedian
for william
he was a funny
funny man
but
taking me
to the airport
he paused
in his routine
and the silence
was like a hole
in the ground
deep and dark
like his eyes
see those
gray wyoming hills
lying off
to the west there
well
my lilly
went off
into them
five years ago
and killed
herself
i tell you this
so you'll know
i understood
when you spoke
of your
loneliness
and then
he was joking
and
i
was
laughing
What we do here is to use at least 3 of the 20 words on the list below in a new poem of your own. Then link up, link back, and twist the night away.

It has been a pleasure to share with you two poets who have been lifelong favorites of mine who I first discovered back in the '70's. In that vein, I offer Neil Young singing "Journey Through The Past." And now, your list:
breakdown
cafe
Chicago
costumes
dwarf
ferry
filigree
jars
kidding
nut
quietly
riddle
scaffolding
semaphore
shatterproof
stingers
trinity
trinkets
unimportant
veranda (Masten misspells it "varanda")
at October 12, 2022
Email ThisBlogThis!Share to TwitterShare to FacebookShare to Pinterest
Labels: Ric Masten, WG Word List