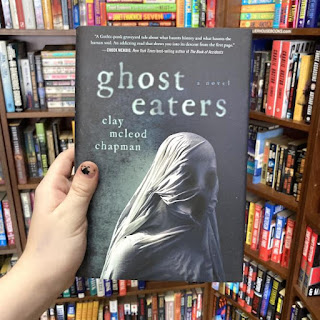 Hello, my intrepid group, and welcome to another Word Garden Word List! Not long ago, I was on Goodreads and saw an ad for a new book called Ghost Eaters by Clay McLeod Chapman, an author I was not familiar with. The cover art was creepy and striking, plus it was Halloween time, so I investigated.
The novel is about a girl named Erin, who has lost her friend Silas, whose lead she always has followed, for good or ill. She's pretty lost after his death, so when she hears about a drug called Ghost that lets you actually see the dead, she's game. What she doesn't count on is how it will take over her life. The hard part, it turns out, is to unsee.
It's a great horror novel and also a terrifyingly accurate portrayal of addiction, whether to a person or a substance, how strong the allure can be, and how difficult to break free of. I absolutely recommend it. And so, our list this week is 20 words taken from the pages of Ghost Eaters. Enjoy, but use only as directed, and the directions are as follows: use at least 3 of the 20 words on the list in a new poem of your own, in any style, length or form. Then link up and visit others. Easy peasy lemon squeezy. Oh and... don't let it haunt you. ;-)
Your list:
bake
bomber
custodian
elevated
emblem
exposed
fever
fixed
inhabit
itch
makeshift
milky
nattering
phantom
quitters
romantic
smokers
sultry
tundra
wobbling
at November 16, 2022
Email ThisBlogThis!Share to TwitterShare to FacebookShare to Pinterest
Labels: hymn for homeless ghosts, WG Word List