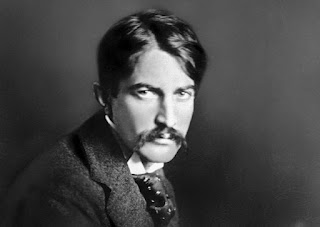 Hello poets! This week I am pleased to feature one of my very favorite poets--a man well ahead of his time--Stephen Crane. He is most well-known for his Civil War novella The Red Badge of Courage. While spending time posing for a portrait, he had been reading dry accounts of battles and he observed that "they spout enough of what they did, but they're emotionless as rocks." Crane wanted to portray what battle felt like, and though he had never been in one, he succeeded beyond anything else he would ever write. 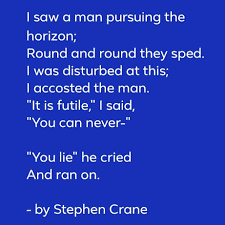 Crane is also known for Maggie, A Girl of the Streets." One day he saw slum children playing king of the mountain, but using rocks instead of snowballs, and he got an idea. He took to task a society that encourages ignorance and self-destruction in its lower classes. Crane is also the author of The Bride Comes To Yellow Sky and the excellent and chilling short story The Open Boat. 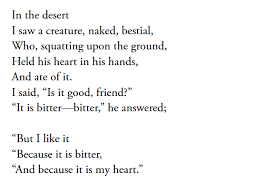 However, Crane said this in comparing his fiction with his poetry: "Personally, I like my little book of poems The Black Riders better than I do The Red Badge of Courage. The reason is, I suppose, that the former is a more serious effort. In it I aim to give my ideas of life as a whole, as far as I know it, and the latter is a mere episode--an amplification." 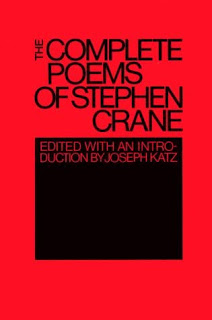 Crane's poems are spare, blunt, filled with raw religious and totemic imagery, and contain an unsparing view of the world. Like Emily Dickinson--whose work he had been shown and may have been influenced by--Crane was far ahead of his time in an era when flowery form was the norm. One reviewer sniffed that "there is not a line of poetry from the opening to the closing page. Poetic lunacy would be a better name for the book" Another called it "so much trash." Crane was reportedly pleased that his book was causing a stir. Time has vindicated him and his influence can be found in the writings of Hemingway, the Beats, and even last week's subject, Jim Morrison. 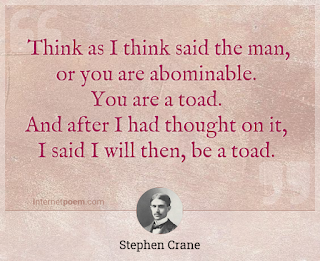 Stephen Crane's life was brief. He died at just 28 years of age, after a days-long Christmas party. Like so many poets before and since, Crane never found financial security, was misunderstood and undervalued in his own time, and fell into destructive personal habits. However, the work he left behind is luminous, sometimes shocking, true, and timeless.
What we do here is to use at least 3 of the 20 words taken from the poetry of Stephen Crane and use them in a new original poem of our own--any style, length, or form.
And now, your word list:
assassin
bitter
blind/blindness
braggart
brave
child
coward
devils
fool
gardens
God/god
heart
melody/melodies
mountain
puzzled
riders
sin
thickets
toad
violets
at November 09, 2022
Email ThisBlogThis!Share to TwitterShare to FacebookShare to Pinterest
Labels: Stephen Crane, WG Word List