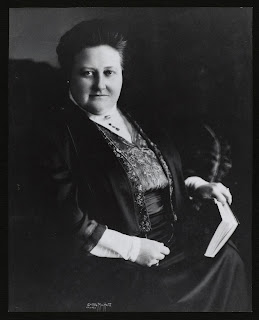 Hello everyone and welcome to another Word Garden Word List. Last week's poems were marvelous, I must say! What we do here is to use at least 3 of the 20 words provided in a new poem on any subject and in any form.
This time our list comes from the Pulitzer Prize winning poet Amy Lowell! When i was in high school, one day I was snooping around in the poetry section and found a volume of her poems. I loved it instantly. One line has stayed with me all of these years: "Fate lays many springes for those with imagination." Well, I had to look up "springes", which turned out to be traps. I felt as if I were being spoken to directly. 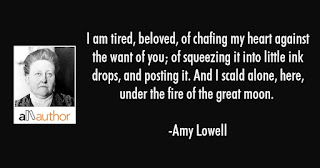 Amy Lowell was an outcast as a schoolgirl, not being conventionally pretty and into the bargain being "outspoken and opinionated." She later wrote that "the stigma of oddness is the price a myopic world always exacts of genius."
Amy Lowell did not begin her career as an imagist poet until age 30 and only lived to age 51, so her window of creativity was brief, but intense. She was a New England spinster from a prominent Boston family, but she was no bore. Heywood Broun wrote of her, "Given one more gram of emotion, Amy Lowell would have burst into flame and been consumed to cinders."
Your list is taken from a volume I have entitled "Selected Poems of Amy Lowell" published in 1928, making my book nearly a century old! It is filled with references to nature, romantic longing, and other cultures. Sometimes she wrote in dialect or vernacular, and I have not included words from those poems. I will include, however, some music to further inspire you. I think this piece says in music what Amy Lowell often said in poetry.