Not far from Detroit, just two or three miles up the road in a northerly direction, lies a little bedroom community called Lathrup Village. "So what?" you'll say. "Those are a dime a dozen and all the same." Au contraire. 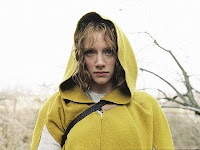 As Villages go, Lathrup belongs right there with that one that M. Night Shamalayan made a movie about, except without the guard towers. 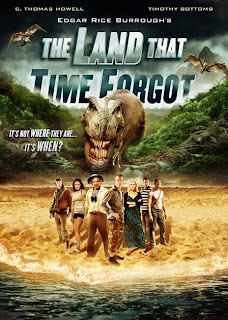 Surrounded on all sides by the much larger city of Southfield, Lathrup Village with its numerous mock-tudors and bungalows with attached garages--by city ordinance!--looks like the sort of place where Beaver Cleaver might come pedaling down the street at any moment. I like to call it "Pleasantville", or "The Land That Time Forgot."

Lathrup was the creation and darling of Louise Lathrup and her mother Anne. It was, in fact, one of the first planned communities in America, so says the official historical site. In the middle of a series of circular streets which form a bewildering wagon wheel, a mansion was built in 1924 on six and a half acres of land. This was the Lathrup mansion, and for a time, Lathrup's first City Hall. In its day, it must have been impressive indeed.

Partial to things both English and Californian, the Lathrup ladies gave the streets names like Middlesex and Kilbirnie, San Diego and San Jose. These streets are not laid out in a predictable grid, but rather, meander and wind, giving the place a pleasingly bucolic feel. A few of the streets remain unpaved, even into the 21st century.

Anne Lathrup school was erected, with that name inscribed into the very cement over the entrance way. A new City Hall appeared. The place became what it set out to be, a comfortable, pretty place to live, famously devoid of anyone without a WASP card. Even such a famous person as the Detroit Red Wings' "Mr. Hockey" Gordie Howe lived in Lathrup Village. Gosh, Wally...what a swell place to be!

Fast forward to the mid-1980s, when I first encountered the place. City Hall had become a decrepit derelict, with peeling white paint, crumbling cement steps, and scads of pigeons living in the elegant cupola, crapping up a storm. By that time, the building was no longer serving as a municipal building, but was occupied by a realty company. I often wondered who would engage a realtor who could not find better digs. After some hue and cry, the building was eventually torn down.

Anne Lathrup school, where laughing blond children had once attended, became first a Jewish school, and then an academy for African American students. Anne Lathrup must have been rolling over in her blueprints.

But what of the famous mansion, the jewel and heart of the place? It had become, as of some twenty five years ago, almost completely obscured by a wild tangle of overgrowth and untended trees. I had occasion to take a walk up the crumbling cobblestones of the old circular drive one day and ring the bell. There had been no name or street number on the tilted curbside mailbox across the street, but I knew this had to be it.

I was pretty sure that I must have mistakenly arrived at 1313 Mockingbird Lane and that Herman Munster would presently be answering the door. It happens that, around this time, I worked with a woman who was living in the house, though not related to the family. She told stories implying that the occupants had become a rather odd and eccentric lot. Then again, they weren't really stories. She liked to imply. If asked about the weather outside, this co-worker would characteristically pause, stare off at some indeterminate spot in the middle distance, and say something cryptic, like "I wouldn't buy new spoons today, if you know what I mean," followed by a knowing, conspiratorial glance. I never had any idea what she meant at all. She must have fit right in! 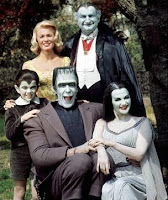 So anyway, I stood for a few moments waiting for Herman to answer the bell, and gawking at the splendid decay that was the mansion by then. When I gave up and walked back down the drive to daylight, I actually had to duck under the vines that were choking the overhanging trees. 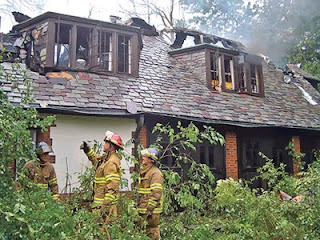 Nonetheless, I was saddened last year when I heard that fire had destroyed much of the old house. Though my mind immediately flashed on visions of some suburban Miss Havisham having an accident with a candle, it was reported that faulty electrical wiring had been the culprit. The house is shortly to be demolished at the Village's expense, as the family has no money. 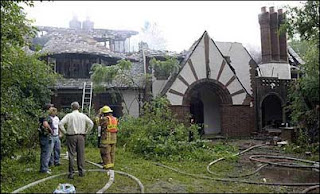 Exclusionary though they most certainly were, nonetheless the Lathrup ladies had imagination and energy enough to conceive of an idea they considered would be beautiful, functional and worthwhile, a haven if you will, and they made their vision a reality. The Lathrup mansion, and the Village which surrounded it, had an undeniable beauty, and it makes me sad to think that the romantic--if ruined--old place won't be there anymore.

Meanwhile, Lathrup Village itself has fared much better, having become a pleasant melting pot of white, black, Chaldean and Asian people, and who knows, maybe even another queer little Catholic gal like me. The Village has changed, but survived, and I confess a soft spot for this little dot on the map, which will lose its heart, the Lathrup mansion, any day now. I'm sorry to see it go.
___________
Labels: this was

Senorita said…
I really like this post, talking about the past and tying it into the present.
August 25, 2010 at 7:17 PM

TALON said…
Thanks, Shay. I enjoyed learning about the village. It's so sad when landmarks change from once beautiful to sad neglected places.
August 25, 2010 at 7:23 PM

Ileana said…
What a magical place it must've been with all that charm and character. I would've loved to have accompanied you there in the 80s.
August 25, 2010 at 9:03 PM

Vesper said…
I found the story of Lathrup fascinating... I love the way you told it, your words filled with the mystery of the place.
August 25, 2010 at 10:48 PM

ellen abbott said…
Thanks for the little history lesson. Interesting story.
August 26, 2010 at 3:18 AM

I'm sure all your information is correct. However, I do not believe there are any other "little queer catholic girls" like you. Oh they exist, but YOU are a unique, you are our Shay :-)
August 26, 2010 at 8:45 AM

Bubba said…
I've been through Lathrup Village and it's quite quaint.

I went to Soughfield High School and our biggest rivals was Southfield-Lathrup, which we all knew as the 'rich kids' school.

(Later we learned that they were only richer than US, but they fell short of kids in Bloomfield Hills, Birmingham and the other Oakland County communities with REAL money)
August 26, 2010 at 10:28 AM

moondustwriter said…
Love the tale you tell. Your story telling is charming my friend.

Those old houses have their charms and I'm sure their skeletons

thanks for all your visits this week

sure nice to have friends in blogdom

Daryl said…
This is so fascinating and your telling it made it especially so .. you have one of the best talents .. an abilty to express yourself and involve others ... whether its poetry or prose ... thank you for sharing this ..
August 26, 2010 at 5:28 PM

Mojo said…
"I wouldn't buy new spoons today, if you know what I mean."?

But imagine. Two daft suffragettes designing -- and building -- an entire town. Ya gotta love that.

We have, just outside Chapel Hill, a place I like to call Stepford. Technically not a village (though it uses that word in its name) it is, all the same, a very creepy, sterile place. A containment area if you will. But try as I might, I can't romanticize the place.