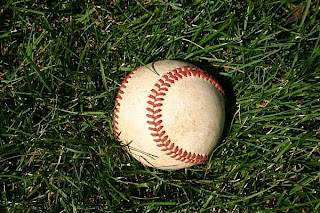 I was the first girl baseball star.

Babe Ruth once came to me in the holy wooden clubhouse where I dressed alone;
He arrived sober, quiet, hat in hand,
To ask my advice.

I told him:
Live temperately.
Recognize the hand of the divine in everything that you do.
Realize that the pitcher is a major leaguer, just as you are.
Be patient, wait for your pitch, but when it comes,
Swing hard and wail the living snot out of it.

I once met Mister Eddie Rickenbacker,
The celebrated flying ace.
I asked him what it was like.
He told me:
"The sky is filled with devils and blackbirds.
I find the enemy, then send them bullets like children's prayers;
When smoke begins to pour out of their machines like hubris,
They go down singing Lutheran hymns
And German beer drinking songs--
They fall
As softly as spring rain.

I once loved a dancer
Who worked at the One Eyed Cat in Baltimore, Maryland.
She told me she had once danced
For Mister Edgar Allan Poe
On the last night of his life.
People said it was drugs,
Drink,
Bad living,
But I think he was driven mad by love for someone he could never touch.
He died scratching poetry
Into the cobblestones
With his fingernails.

I was the first girl baseball star.
I once struck out Babe Ruth.
That was when I learned
That failure can be more beautiful, sometimes, than success--
And so I went home to the gypsy camp I came from.
I told them how I'd gripped the ball
And done everything the way I'd planned to;
These women who had known me all of my life,
Just laughed toothlessly, silently,
And sent me to collect the spirit of Edgar Allan Poe.
I took him up tenderly, like an angel, or a new mother,
Stroking his filthy hair;
I told him how every time my bat kissed the ball,
It would fly far and fast into the sky, disappearing like joy over the tin Coca-Cola signs
And into the hands of some grinning urchin in a newsboy cap--
Then I kissed him
And his spirit flew away like an oriole,
Set free by my love
And gone.
________
at November 07, 2009
Email ThisBlogThis!Share to TwitterShare to FacebookShare to Pinterest
Labels: alfie poems, b2p, clever gypsy poems, famous figures, misc. love poems, Poe