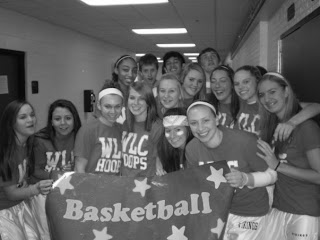 Another one I literally dreamt up....

Beeville is the kind of place you move away from.
There are silos and an IGA out on Miller Road, out by the old assembly plant.
Its heavy chains loop around the gates like yarn in a girl's hair,
But of course,
Girls haven't worn yarn in their hair for decades.

Out at Beeville High,
The boys' football team is practicing--
They are called the Bucks
And bucked is what they are.
Ricky Lundquist is the best they can do;
The kids call him Fat Ricky
And the football squibs out of his fingers like a link sausage from the hand of an infant
Playing with its food at the IHOP down Highway 90.

The last time Beeville won anything,
It was the lady Bucks in 1990.
They rode their ancient bus to Chesaning and Fowlerburg,
And Becky MacGruder's hook shot would arc through the gyms like a bright planet in the winter sky.
She kicked ass,
And all the lady Bucks would hit the DQ on the way back,
The yellow bus bouncing over the pot holes in the lot
Like a happy drunken duck.

Becky MacGruder has kids of her own now.
They wear a lot of crap around their wrists and necks
And howl like the damned if made to stay home on a Saturday night.

Sometimes if the doorbell rings or the dog gets into something,
Becky will shift her laundry basket from a hip to the stairs
And go off down the hall just like she was driving the lane.
When she gets back,
With somebody's sweatshirt in her hand, plucked off the back of the couch or a kitchen chair,
She balls it up
And sinks it in the laundry basket from fifteen feet,
Nothing but plastic.
Beeville lady Bucks!
Yeah!
It's still on the sign out on Miller Road, even though the "a" in "ch mpions" has fallen off.
They locked up the title
On a crisp night in March--
Locked it up tight like the gates of the assembly plant,
And even Mr. MacGruder, who hardly ever said two words in a week,
Told his daughter how very proud of her he was.
____________
photo credit: Krista Hakola
at February 21, 2009
Email ThisBlogThis!Share to TwitterShare to FacebookShare to Pinterest
Labels: b2p, story poems