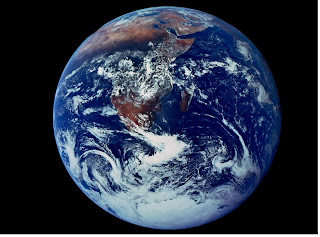 An astronaut
Moves into a mobile home outside of Keller, Arizona;
If she wants to visit Cindy's Salon and get her hair highlighted,
She has to unscrew her helmet
As if she were a big white jar of ketchup.

One day the postman, with evidently nothing better to do,
Asks her, "What was it like on other planets?"
She tells him it was the same as here,
Except that the tv programs were a little different.

She no longer attends the tedious NASA reunions;
When they would start to go on about the honor of being a part of the space program,
The fork would slip from her big gloved hand
And she would fall asleep in her soup.

"All I ever really wanted,
Was to go someplace where I could hear myself think."
But now her thoughts devour her
And she can never get far enough away
To make them finally shut up.

"You look like an ice cream bar with legs," says a little boy in the Kwik Mart.
She stands there,
With the fluorescent lights reflecting in her visor,
And remembers the first time she ever saw the earth from space;
It was so blue, like
Paul Newman's eyes,
With clouds sprayed gracefully across its face
Like a woman's hair on a windy day.

She clomps out to her car
In her great awkward boots,
And grips the wheel with her fat white fingers,
Then just sits there.

Keller, Arizona
Is a place where a lady can cry in her car
And not be stared at as if she'd just flown in from Mars;
And though it is so dry there,
It is still part of the blue,
And it is sometimes windy
As well.
_________
at February 05, 2009
Email ThisBlogThis!Share to TwitterShare to FacebookShare to Pinterest
Labels: story poems