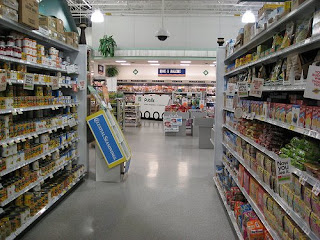 Celery have launched a major offensive.
Crackers have dropped leaflets and jammed Radio Free Poultry.
Tomatoes have made a stand in an old department store...they may have enough gelatin prisoners to make some kind of deal.
A dazed mango wanders through the streets as loaves of bread rumble past on their way to the gravy front.
Bags of sugar patrol the skies.
In a house, a mother is making dinner for herself and her daughter.
"We must not do this, it is against the War Act," she says.
On the edge of the city, eggnog has gained a foothold.
Bacon has been subdued.
Some canned goods start up the walk towards a house...
___________
at February 13, 2009
Email ThisBlogThis!Share to TwitterShare to FacebookShare to Pinterest
Labels: early poems, story poems

I love it - you politicized and militarized the market! I have to tell you that I literally laughed out loud when I read the "radio free poultry." Classic Shay! This is another winner.

I had to come here and thank you for the lovely comment you left on my blog. I truly appreciate the fact you took time to write in detail what you liked about my poem. Thank you. It means a lot to me.

And I must say that the quick read I had in your blog was stunning... I will come back with time. I LOVE THIS! Felt like home! First time in this blogging world.

Mmmmmm, great writing. Made me feel hungry - off to have breakfast. (20 minutes later). What happens when the canned foods reac the front door?? (Help, help). And the hero is .... bread. She is everywhere, often taken for granted but always there to help. She can wrap herself around anything and soak up all manner of pressure. I hope when canned food opens the front door he is faced by sliced loaf saying 'Go on punk, make my day'.


And I went over to Jannie’s as well

I hope it doesn't spread to my house. Dinner is tough enough when the food is well behaved.

We need to swap minds some day, obviously I'd be getting the better end of the deal, but I'd love to see life how you do. Grocery wars :), I love it. The dazed mango was so cute. I could picture everything and it was really funny.

You just be cracking me up with this.

Bags of sugar patrol the skies is just too cool.

LOL, thanks everyone. Glad you liked this oldie but moldy.

Pienovski, I'm glad you like Word Garden! Please come back!

Perfecthindsight, welcome to you as well!

Hahaha! This is very cool.

Thanks, RK. Beware prunes and arugula, they are watching you, even now!