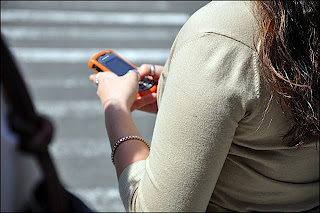 The amazing Daryl has started a feature called Tell Me A Story, in which she posts a photograph and asks her readers to make up a story about it. Here is mine. The photograph is, of course, Daryl's. :-)

The Little Orange Phone was happy. This had not always been the case.

Shortly after being born, in a dismal factory someplace far away, the Little Orange Phone was sold (sold!) to someone called FlyDJ4u, who smelled bad and listened to worse music.

What? Did you think that a phone cannot smell nor listen? They certainly can. The Little Orange Phone's favorite scent is lilac. Its favorite music is Diana Krall.

After only a day, FlyDJ4u returned the phone to the store, because he said it wasn't working properly. It wasn't. It didn't like him.

After being repackaged and set on the shelf again, The Little Orange Phone was bought by LilacGrrl. Everything about Lilacgrrl is wonderful, according to the Little Orange Phone. She smells good, listens to Diana Krall and wears the most agreeable and pleasing jewelry.

One day, Rockgod54 texted Lilacgrrl. He said not-nice things. He said u better call me. He said, who do u think u r, the queen of the world?

The Little Orange Phone knew Lilacgrrl would be upset. So, it made a decision. All by itself, it texted Rockgod54 back. Calling itself CraZ4LG, it said, leave Lilacgrrl alone. If you have a problem, come see me at Jim's Karate School, and gave an address, then added: and she IS the Queen of the World.

Then the Little Orange Phone lay back inside Lilacgrrl's bag, and smiled to itself. You didn't think a phone can smile? It can, when it is very very happy.
Labels: Daryl derivatives

mac said…
My Little Gray Computer is smiling now. It likes your story.

Anonymous said…
My computer is smiling too. My little red and white phone probably does not like me too much though, I constantly drop her on the floor! Sorry little phone!
April 11, 2010 at 10:07 PM

steveroni said…
My DROID (named Flex) laughs a lot--but I have the strange feeling it is laughing at me. That's the way a good neurotic thinks.

So when Flex is bad I hook him up to the computer and threaten to download the 240GB Hard Drive into his gullet.

Senorita said…
You have way more of an imagination than I do. My story would've been that Woman with orange phone is texting her lover for a rendevous. End of story. Phone gets usage, and woman gets laid. Everyone wins !
April 11, 2010 at 10:56 PM

Cloudia said…
you are awesome!

TALON said…
Loved it, Shay. I always thought computers made life-altering decisions on behalf and unbeknownst to their owners, but who knew phones had such power? I love the way your mind works :)
April 11, 2010 at 11:58 PM

Mojo said…
I loved it when I read it at Daryl's, and I still love it. Honestly girl, I think you could make an empty potato chip bag compelling.

SharoninWonderland said…
This was the most amusing thing I've read all day.

Unknown said…
I have no idea how you do this outside of the fact and it's a fact that you have one of the most wonderful imaginations in the world, and you make me feel not so alone!!!

I am never going to look at my phone the same way again and I'm hoping I smell nice and am agreeable to said phone...:-)

who said…
when my phone and computer do things on their own I usually get frustrated. But this story is funny.
April 13, 2010 at 12:52 AM