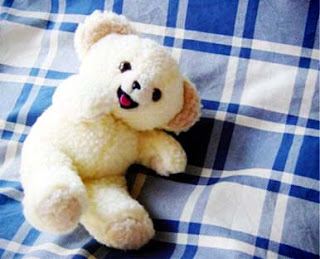 Snuggle Bear goes sour.
Belligerent and profane, he starts getting in fights outside popular clubs at two a.m.
Unflattering photographs appear;
So do lawsuits and a nasty, protracted divorce.

Snuggle Bear's mother goes on record vouching for his sweetness
And his inability to do wrong of any kind.

Ratcheting up the madness,
"Snug-dawg" joins a street gang.
Heavily tattooed and strung out,
Snuggle Bear waves a firearm around in broad daylight, cursing in Spanish.
Too bad for Tommy Tooth--
Right place, wrong time,
He dies of acute-onset lead poisoning.

At Snuggle Bear's sensational trial,
Snug's attorney complains to the court,
Revealing that the prison laundry does not use fabric softener.
"This amounts to nothing less than torture for my client!" he booms, in theatrical outrage.
Snuggle Bear titters in his ridiculous high voice, which makes his homeys sitting in the gallery squirm and look away.

Snuggle Bear is convicted and given 99 years.
In jail, he finds The Lord.
He does all that he can to bring the peace of forgiveness to his fellows,
But his violently insane cellmate is unreceptive, and knocks the stuffing out of Snuggle Bear.

After fifty years fly by,
Snuggle Bear is released for good behavior.
Old, tattered, and missing an eye,
Snuggle Bear is no longer telegenic.
He shambles into a coin laundry to get out of the snow,
And sits down in a broken molded plastic chair.
The woman who empties the lint filters and picks up the discarded detergent jugs stops and scrutinizes him.
"Hey! I know you!" she cries. "You were the Pillsbury Doughboy!"
She grins and pokes his middle.

Despite his struggle, ruin, and years of desperate searching,
The gesture touches a part of Snuggle Bear that is still as innocent and pure as Ivory Flakes.

His high-pitched laugh returns, like a wedding ring rescued from a drain,
Proving that,
Like bad poetry,
A thing can be obnoxious and kitschy all at the same time--
Leaving hearts noticeably softer
And filling the air
With the fresh, clean scent
Of redemption.
_______
Labels: crime and punishment famous figures fractured fairy tales

Mama Zen said…
I wanted to make an intelligent comment, but Baby Puppy has placed her adorable self in front of the screen so she can admire your Shay-girl on the sidebar!
February 5, 2010 at 2:17 PM

TALON said…
No fabric softener in prison? That is indeed cruel and unusual punishment for even the most hardened criminal snuggle bear.

Elizabeth Bradley said…
You had me at hello with this one, and that last sentence was awesome. I love redemption stories.
February 5, 2010 at 4:30 PM

Dulçe ♥ said…
Shay.. it gets difficult to comment. you know i hate those "oh lovely or oh beatiful" ones... They kinda mean nothing. But damn it. What else can I say here?

Unknown said…
nice bit of prose Shay. There are two heads to every thought. Some of the meanest people can come to sudden recognition....and make a difference to others of same background.
February 5, 2010 at 8:14 PM

Anonymous said…
I never stop being impressed with your creative genius.

the walking man said…
I only wish this was the case in the majority of them who have become so heavily institutionalized.
February 6, 2010 at 12:04 PM