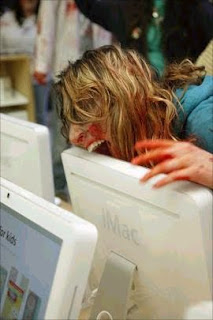 "Look how casually they're dressed," sniffs Mildred Mump. "They must be Catholics."
"Shhh!" scolds Penelope Jones, the local librarian.
"I wonder if any of them are single?" speculates Madison Monroe to her friend Kimberly.

The minister invites anyone who would like to be saved, to come up to the front of the church at this time.
The zombies all come.
They eat his brain.

"Welcome, brother!" says old Melvin Baker, not understanding, patting a zombie heartily on the shoulder.
The zombie's arm falls off.
Then the zombie eats his brain.

Grady Popper, who likes to remind his wife that it was Eve who tempted Adam and ruined everything,
And who rests secure in the knowledge that he will go to Heaven while all the Jews, lesbians, liberals, and the like, will burn eternally in an everlasting fire,
Is attacked by a zombie.
The zombie goes hungry.

To the disappointment of George Gipper, who is waiting outside to collect his wife and kids,
And who wanted more time to read the sports section,
Nine a.m. service lets out early.
The zombies pour back out,
Not bothering to stop for cookies in the social hall.
After eating a few last brains for the road, the zombies all head for Danny's Coffee Shop.

"Here comes the church crowd," says Denise, looking out the window.
Extra coffee is put on.
"Zombies!" cries Chloe, the way children say, "The ice cream truck!"
The Queen of the Vampires shape-shifts into a black panther and crouches on the back of a booth, switching her tail.
"Oh god," mutters the Succubus, rolling her eyes.
"Yes, hun?" says God, looking up from her receipts.

At that moment, the zombies come pouring in.
Chloe's eyes get big, and, biting her lip quite charmingly,
She swings a lamp at a zombie with everything she's got.

The zombie's head falls off.

The Queen of the Vampires jumps off the booth and takes out three more zombies,
Then twists and charges around,
Swiping at them with her fearsome claws until all the of the zombies are dead.

The QOTV shape-shifts back to human form, and she and Chloe grin and exchange high fives over a pile of zombies.
The Dark Haired Chick walks in the door and steps over the mess.
"Dahling!" she exclaims, seeing the QOTV.
"Rowww," purrs the QOTV, which, since she is in human form, is kind of neat, and means,
"Look what I did!"

It is not even ten thirty, yet.
_______
Labels: Chloe the QOTV zen cones zombies

Riot Kitty said…
Why can't they take over the born-again church that clogs traffic on my street so many times a day on Sundays?!
February 1, 2010 at 1:51 PM

Dulçe ♥ said…
I did not expect these zombies today but of course I knew they were waiting to come out... so.

Ileana said…
I love the way Chloe says "Zombies" and that line, "They must be Catholic!" made me laugh out loud.

tattytiara said…
I had no idea zombies got up that early, but it certainly accounts for a lot of their behaviour traits.
February 1, 2010 at 6:23 PM

the walking man said…
It's a wonder that they didn't know the words to "How great thou art" seeing as now a days it's a main zombie song. But it is no wonder they headed for the diner after the church service, even though they had already eaten, that first meal place is like having Chinese food, you can pack it in and still be hungry an hour later.
February 2, 2010 at 8:49 AM

Marion said…
You made me laugh out loud. Zombies are totally cool and "in" nowadays, I hear, even hobnobbing with the likes of Jane Austen. I saw my first zombie movie when I was like 5 years old. It was called "The Children With the Wooden Eyes". My two older sisters picked the flick. I didn't sleep for a year! LOL! Great post. Blessings!
February 2, 2010 at 7:10 PM

Susan English Mason said…
I am enjoying the emergence of the Dark Haired Chick.