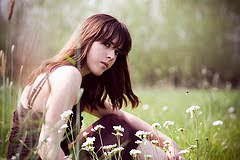 She was a beautiful girl,
The daughter of a man as bland as an old dinner plate,
But successful in business
With a factory making ladies' apparel;
Empty dresses emblematic of his wife who had died.

She was a talented mimic
And mother to both herself and her younger brother,
A boy who could draw anything, and render it more soulful than the thing itself could reveal.
In the parlor of their dacha,
The year they were seventeen and twelve,
She would make silent impersonations at the servants' backs,
And soon her brother would roll over on his,
Helpless with stifled snickering.

She was a beautiful girl;
Pressed like a butterfly in a book,
Half sure that the warm weeks of 1917 would never end.
Her heart was a month of such summers
And she and her brother like rowers
Moving together on the same waters.

They were laying in the grasses, thinking of nothing, staring at the sky,
When the men on horses came;
The dacha and the factory gone like a summer storm.
Their father, after that, blank as an old dinner plate,
Unspeaking, vacant, and soon dead.

She was a beautiful girl,
And in St. Petersburg, she had to learn to survive the way such a girl with no other choices always has;
And when she drank too much,
Which became often,
Her brother would sit at a table nearby, drawing strangers' portraits
To try to pay some of her debts.
Through those days,
She only held on because he needed her.

She was a beautiful girl,
And there was one soldier who could look into a crowd,
And see only her, moving through it.
On the day before he was to take the crowded troop train east,
They held each other in a theater,
Shutting out the ridiculous performances, both on the stage and in the streets.
She knew
He was not like the others,
And that is why she knew
He stood no chance of ever coming back.

And so, rather appropriately, I close out another notebook full of poems, with this one. I had begun it on November 20th, '09.

A note about "Beautiful Girl." All through my childhood and on into my younger adulthood, I always had the strong sense that I should have had a sister. I asked my mother repeatedly about it. Once, she told me she had lost a baby, which would have been a girl, between my brother and me. But when I asked her about it again, later, she said I was mistaken. Perhaps I was, or perhaps she just didn't want to talk about it, the great family trait. In any case, the feeling was so strong, that, in the 1980s I went so far as to check birth records, feeling that perhaps there was a twin who had not survived. I didn't find anything.

Those of you who know my background may intuit who this missing girl may have actually been. I rather think that may be so, myself. But, in college, in the early 80s, I was given a stream-of-consciousness writing assignment, and this story just flowed out. I could feel the breeze through the open windows of the dacha, it was like being there. Then, years later, under hypnosis, I "remembered" an entire past life, this life, as the brother. So, this story is true, and is my own....perhaps. Did I mention that I am a double Gemini (sun and moon), sign of the twins?

Anonymous said…
May I simply say that this writing fascinates me..

mac said…
So, you have had this "curse" for a while?

Susan English Mason said…
She was a beautiful girl pressed like a butterfly in a book...and she and her brother like rowers moving together on the same waters. I love that.
January 31, 2010 at 7:34 PM

cinderkeys said…
I liked this.

I genuinely salute those who can write poetry that touches the spirit and the mind.

Marion said…
This is awesome writing. I find stream of consciousness writing to be the best kind...it frees your mind from 'subjects' or preconceived notions. Blessings!!!!
February 1, 2010 at 9:30 AM