The Afternoon of Lost Opportunity 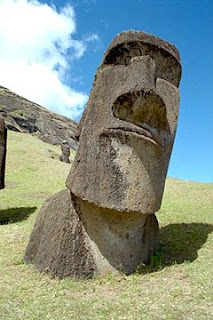 The Stone Jockey's career is going poorly.
He is from Argentina,
But everyone always assumes he is from Easter Island.
When he approaches the horses,
They panic;
And even though he regards them with only the tenderest affection,
He can never get near them.

The Stone Jockey sits on a bench in the park, trying to relax,
But there is a problem with pigeons.
A woman walks by,
And though he regards her with only the tenderest affection,
He knows it is hopeless--
He will never get near her.

This particular woman
Is a part-time fashion model.
She lives on Diet Pepsi and cocaine,
And speaks only Romanian.

"If I had one wish," says the Stone Jockey to the pigeons on his head,
"I would wish to be the lightest feather in the wing of an angel."
He imagines this angel to be the coked-up fashion model, who is hurrying away to meet her connection, a man named Raoul.

If she had come over and kissed the Stone Jockey instead,
His head would have split open
In an earthquake of happiness,
And his soul would have risen and fluttered
Like the mane of a white Arabian
In the wind.
________
Labels: story poems sweet dreams are made of these

In a tornado of happiness,

And my soul rose and fluttered

Like the white mane and tail of a horse, blowin' in the Arabian wind.

Lagniappe: It was over as quickly as it had begun, Whoooosh!

Fireblossom, I just loved playing with your wonderful, carefully chosen words--promise, it will not happen ever again!

TALON said…
You have a truly unique and amazing imagination - and a gift with imagery.

G-Man said…
So....?
There is a horse buried under that poor Jockey?

Anonymous said…
Oh I know the type of woman you're describing, Diet pepsi and cocaine. Horrible shame it is. Malnutrition and addiction as a way of life. And a bitch all the time from repressed hunger.

That is a powerful poem.

The romantic query letter and the happy-ever-after said…
There is genius in it and I'll tell you why. You tap right away into my emotions by making me feel his isolation and longing. It fills me with thoughts of how hard a life sustained on not but "Diet Pepsi and cocaine" must be that when compared to the fruitless longings of a Stone Jockey it seems more terrifying.
Thanks for sharing this with me.
Warmest regards,
Simone
January 2, 2010 at 4:10 PM

Joanna Jenkins said…
Every time I visit I'm surprised and impressed. You have a great way with words. Thanks for sharing them with us.

Kay said…
where does it come from? always so creative, energetic, heart-felt...i just love reading your masterpieces!
January 5, 2010 at 9:30 PM