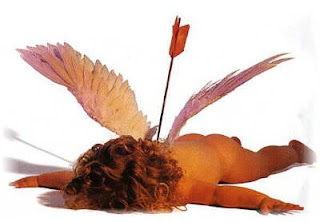 Cupid, drunk and stumbling,
Comes out of a bowling alley bar.
He drops his bow
~twice~
But finally gets a few arrows and curse words off.

His arrows hit some people in the foot, resulting in troublesome fetishes,
But, because he is Cupid, fucked up beyond all recognition or not,
A few times he hits people's hearts.

"There!" he crows, waving a bottle. "Fall in love, you dopes!"
Except it sounds like, "There!
Fawin la, y'doe," because Cupid is fried to a crackly crunch.

They do, you know.
Fawin love.
For a while, life is paradise, happiness, a candy-coated love song world.
But,
By the time Cupid has spent the next morning talking to Ralph on the big white phone, and shoveling down aspirin;
By the time he has sheepishly turned in his report to God, and completed his community service,
These unions have only led to
Disaster,
Divorce,
Dementia.

Cupid gives up bowling and starts hanging out in church basements, drinking bad coffee,
But he still can't resist firing off a few arrows before and after the meetings.
His sponsor, a former boxer, tells him to "cut that shit out,"
But at least, sober,
His aim is a little better,
Though far from perfect.

If you fawin love,
Don't believe it is fate, kismet, "meant to be."
(you thought that last time, remember?)
It's just that little fucker Cupid
Screwing around.
_________
Labels: diet coke poems love is like falling and falling is like this

mac said…
Well, this explains a lot.
I had been wondering about that l'il guy. I thought maybe he was just being mean to me, or something.
Turns out, he's just incompedent. Or maybe he shot me before his sobriety ;-)
January 24, 2010 at 10:38 AM

Susan English Mason said…
That picture of cupid is so funny. I don't know where you find these photos but you always pick just the right one to go with your poetry.

My fave line: "His arrows hit some people in the foot, resulting in troublesome fetishes."

Bill Lisleman said…
great picture - did you steal it?
so that's where the foot fetish comes from - thanks I would have never guessed. Add a little logic and now I know about the ass-man thing too.
January 24, 2010 at 12:40 PM

Ellen--that's a lovely comment all by itself. Thank you, my friend.

Mac--always allow for simple boneheadedness before assuming meanness. And yes, it does explain a lot, doesn't it?

Secretia--you old softie you. Goddess love ya. There should be more like you.

Pouty--you've got questions, I've got answers. And yes, that picture made me laugh out loud as soon as I saw it.

Riot Kitty said…
This one made me laugh! Especially the part about foot fetishes. Remind me to tell you an airport story related to that.
January 24, 2010 at 1:36 PM

"fried to a crackly crunch" - that is a perfect description!

The romantic query letter and the happy-ever-after said…
Bleeding thoughtless cherub, well at least now I understand better my 20's arrows in my feet OH well.
You have a lovely week Lamb.
All my very best,
Simone
January 24, 2010 at 9:52 PM

Elizabeth Bradley said…
Aw crap, my son just left his wife and is asking for a divorce. I'd love to show him this appropriately directed poem...but he's not ready. Damn Cupid, damn arrows.
January 25, 2010 at 3:35 AM