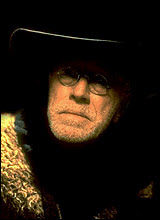 The Vampire Hunter hides in the shadows of a doorway,
Like a crucifix hung on the wall of some mothball priest's gloomy wood-paneled office.
He kisses the silver cross he wears around his neck.
All his life,
He has waited for this moment.
The years of training and study,
The hardships,
The self-denial and renunciation of women,
Vice,
And all things secular and sensual,
Culminate now.

The Queen Of The Vampires is walking towards him, down the sidewalk.
Her leather boots, her pea coat, her scarlet scarf and mittens,
All identify her,
For he has studied her.
Year upon year, through the miserable, solitary evenings, he has learned her ways
So that he might kill her
And find favor with God.

Now she is nearly within his grasp! He can see her, almost feel her, falling fatally into his trap.
Her heightened senses are distracted because she is listening to Morrissey on her ipod. The song is "All The Lazy Dykes."
She is dreaming of the latte she will get at Danny's Coffee Shop, two blocks away.

Giddy with anticipation, The Vampire Hunter is incredulous when a truck pulls up and a dark haired woman shouts,
"Heyyyy! How ya doin'?"
His eyes bug out and he gestures frantically for her to go away.
"Listen, dude, would ya like to buy some Girl Scout cookies? How about it?"
They must be able to hear her in the next county. How can this be happening?

The QOTV stops in her tracks and waits as the truck screeches in reverse and backs up beside her.
The Dark Haired Chick, for it is none other, purrs,
"Thin mint?"
The QOTV grins and gets in.
They head for Danny's.
Both women blow a kiss to the Vampire Hunter as they speed past.

At Danny's, Chloe is idly scanning the free newspapers by the door as the QOTV and the D.H.C. blow in.
"Hey girl," says the D.H.C.
The QOTV winks.
"Bitch-es," says Chloe, in a clipped accent, as if she were a maitre'd saying, "La-dies."
Then she casually reaches over and turns the lock on the door, just as the Vampire Hunter comes running up.
He pounds on the glass, nearly foaming with frustration.
Chloe goes back to reading her StreetBeat.
Denise, the waitress, is on her smoke break, and she squints at him through a cloud,
As if he were some odd fish flopping about on the sidewalk.

However, there is at least one tender heart in every room, and God walks over to the door and slips outside.
"Sucks to be you," She says.
"What?" he asks, wheezing like a leaky tire.
"Stop stalking my girls," says God, and with that, two beautiful angels descend from Heaven and carry the Vampire Hunter away with them.
Later, they deposit him in some guy's soy bean field.

Sometimes, even the best laid plans go awry,
And that is why
It is best to approach all endeavors with a certain flexibility,
And also, whenever possible,
A grande mocha from Danny's in a to-go cup.
_______

The romantic query letter and the happy-ever-after said…
Now you mustn't think me mad but this piece had me singing out loud that Leonard Cohen song Suzanne. I guess that must mean I like it a lot.
Warm regards,
Simone.
January 21, 2010 at 9:37 PM

TALON said…
Loved it! And I think some guy's soy bean field is the perfect dumping ground for the Vampire Hunter.
January 21, 2010 at 10:42 PM

mac said…
I was worried. I thought maybe....

Elizabeth Bradley said…
~~ However, there is at least one tender heart in every room...

Anonymous said…
I was a tiny bit worried for QOTV at first, but I thought she would survive that close call.

The story, chapter actually, ended in a way I liked.

God knows what's going on all the time.

ellen abbott said…
Only a man thinks that killing something is the way to please god.

Unknown said…
This is brilliant...oh how your god and mine are so similiar that is what ties us whether we acknowledge it...well that, lattes and vampires...
love
gabi
January 22, 2010 at 8:00 PM

Snowbrush said…
So, let me get this straight. God is a waitress at Danny's and Denise is also a waitress at Danny's, but God is not Denise. So far, so good, but who is God, and where is Danny, and what did the vampire hunter do in that soybean field anyway? Did he ponder the symbolism, as I am doing; or was he maybe allergic to soybeans, and therefore understood exactly why he was dumped there?
January 23, 2010 at 2:41 AM

"Denise, the waitress, is on her smoke break, and she squints at him through a cloud, As if he were some odd fish flopping about on the sidewalk." I have no idea why I like that line so much; it tickled me.
January 23, 2010 at 9:37 AM

Kay said…
:) any influence from the lesbian vampire book you are reading? excellent advise in the end.
January 25, 2010 at 7:40 AM 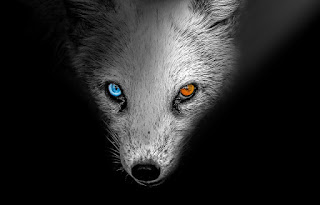