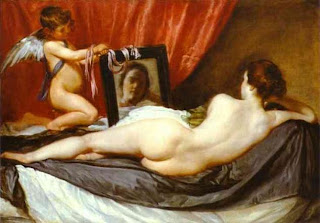 Simone has graciously, after I persuaded (tackled) her, tagged me for a meme! There are many questions. Let's get started!

What's the last thing that you wrote? What's the first thing you wrote that you still have? The last thing that I wrote was my poem "Lipstick", written and posted last night (January 6th). The first thing that i wrote, which i still have, is probably some poem from high school. I have them in an envelope in the closet someplace. When i was in tenth grade, my English teacher told me to forget about what the rest of the class was doing and finish a short story I had begun. I finished it and kept it for many years, but unfortunately, it wasn't written on acid-free paper, and at some point a few years ago it all turned to soup. It got an honorable mention in the Detroit News Scholastic Writing competition for the year 1872, or thereabouts. It's been all anticlimactic since then.

Angsty poetry? I wouldn't characterize it as such, no. My friend Kelly Dickson says i write a certain kind of "sighing" poetry very well. I paid her very well to say so. Thank you, Kelly. Then there is the stuff about cupcakes joining the army and such. I simply describe the reality that i see. (pause). What?

Favorite genre of writing? Technical manuals. Oh all right, I made that up. Love poems, i suppose.

Most annoying character you've ever created? The English Club Gentleman. Now that the aversion therapy has worked, and i have a pathological terror of all things English, he won't ever be coming back.

Best plot you've ever created? The love story of the Succubus and Chloe. Honorable mention: Babs vs. Bitsy at Objets D'art.

Coolest plot twist you've ever created? In "Childish Things", when God turns out to be a giant muffin.

Do you type or write by hand? I compose my poetry longhand in a series of spiral notebooks. I also carry a small notebook at work, in case inspiration strikes. I write Objets D'art on the computer.

Do you save everything you write? I save almost everything. When I do fail utterly, though, I can't throw the unsuccessful effort away fast enough.

Do you ever go back to an idea after you've abandoned it? Only very very seldom. About once a year I might re-animate something I've abandoned.

What's your favorite thing you've ever written? I always seem to like the most recent stuff best. I can't even begin to be impartial until a month has gone by. Having said that, I love the one i just wrote called "Longing" which is actually about Beatrice. Until I wrote that, my favorites were "Valentina" and "Strippers." My favorite from among my love poems is "The Hill Is Closer To Heaven." I'm also very partial to "Dancer On A Rope Bridge."

What's everyone else's favorite that you've written? Gosh, I don't know. I know there are people who especially love "Maricela Mexicana", "Strippers", and anything with Chloe in it.

Ever written romance or angsty teen drama? No.

What's your favorite setting for your characters? Danny's Coffee Shop in Norman.

How many writing projects are you working on right now? One. This one.

Have you ever won an award for your writing? Just blog awards. My dog admires me. Is that an award?

What are your five favorite words? Lobotomize, palaver, incandescence, mayonnaise and frisson

What character have you created who is most like yourself? The Queen Of The Vampires.

Where do you get ideas for your characters? To quote Helen T.'s six year old daughter, "it is information my brain told me."

Do you ever write based on your dreams? Yes, I love to literally dream up a story. There are scads of dreams-turned-poems on this blog, including "The Burn", "My Drinking Dream Of Helen T." and many others.

Do you favor happy endings? As a reader, yes, very much so. As a writer, sometimes yes, sometimes no.

Are you concerned with spelling and grammar as you write? No. I just want to get the thing down on paper while I'm in a zone. I don't worry about punctuation, spelling, any of that until later.

Does music help you write? It used to. I would put a song on repeat play and write. I once used AC/DC's "Thunderstruck" to help me write a scary scene, and it worked so well that I have never been able to listen to that song again. For a while, I used foreign language music, so the words wouldn't influence me. But for a while now, I have been writing in silence.

Quote something you've written. Whatever pops into your head. "If they keep on living on the Mobius Strip, they may just find themselves yet." The last line of "Strippers."
__________
The artwork is The Rokeby Venus by Diego Velazquez. I have it on a card from Kristin.
Labels: memes

Ileana said…
I've told you a couple of times now, but once again...

1) you are my favorite poet;
2) the word, Succubus, will forever remind me of YOU

Cloudia said…
"A professional is someone who can do good work when they don't particularly feel like it."

mac said…
Well, I had a couple of favorites.

That all changed when I read Longing. That Poem, I dunno, makes me weak. I can barely read it - still !

TALON said…
I love reading about other people's creative processes. And I'm sorry your school work turned to mush.

steveroni said…
Remember? Beethoven composed much of his music from little notebooks which he used and carried always. Not "spiral" LOL ...but they did serve him well.

Yes, mayonnaise also is a fav word of mine. I even like it on sandwiches

And Fireblossom you are a fav WRITER of mine XXXXXXXXXXXXXXX XXXXXXXXXXXXX (No, I did not fall asleep at the wheel, just had a moment of inspired editorial prudence!)

Questions and answers gave a delightful insight into your work life, and were a pleasure to read.

Riot Kitty said…
This is awesome, thanks for sharing. God turns out to be a giant muffin?! You and Mr. RK are definitely related.
January 8, 2010 at 1:39 AM

Anonymous said…
Thanks for sharing all that with us. I knew you never get writers block, you're the Word garden, words are growing all the time!

Vesper said…
Shay, your poetry, your imagination, your talent at putting words together never cease to amaze me. Thank you for this additional insight into your mind and heart.
January 8, 2010 at 7:16 AM

Shadow said…
"it is information my brain told me." now this is one smart 6-year old!!!

The romantic query letter and the happy-ever-after said…
Right, first my every thanks for your consent to being tagged.
Now, what's this 'Create at will,' are you trying to make me jealous?
You have a lovely weekend.
Big Hug,
Simone
January 8, 2010 at 4:11 PM

Elizabeth Bradley said…
I am going to echo what others have said here. You are one talented broad.

I too prefer my most recent writings, knowing that as I keep on writing, the recent work will fall out of favor. I feel that we learn as we go along and become better and better, more skilled at getting to the point.

Joanna Jenkins said…
This was a great interview. I learned so much about you! Thanks to you and Simone.

And the term "sighing" poetry" is a perfect description of your writing!

Fireblossom said…
Thank you, everyone! Gee, i was afraid I might bore everyone. I'm glad you liked it! And yeah, isn't Kelly's observation right on the money?
January 8, 2010 at 6:26 PM

Susan English Mason said…
I have actually SEEN the spiral notebooks and it is amazing because there are almost no words that are crossed out. That is a fact. It's like she's channeling the words to her poems.

I am honored that you mentioned that I love Maricela Mexicana (even though you did not name names).